Do you remember the time when recording a voice required a tape recorder? Gradually that is converted to a voice recorder. And finally, after the voice recorder for android has taken responsibility through your smartphone.

So what are the best voice recorder apps for android?

Although most of the Android mobile provide inbuilt recording apps for android, there are some apps which have unique features with to record audio. If you are in a meeting and bothered about the meeting notes directly record the voice. Or if you are a singer and always in the dream of music record the notes suddenly coming in your mind and have it explored later on.

In short, from call recording to music creation to VLOG recording, a voice recorder app is the handiest tool in your android phone.

We want to spotlight on Top 5 best voice recorder apps for Android in this article, to help you choose from them. 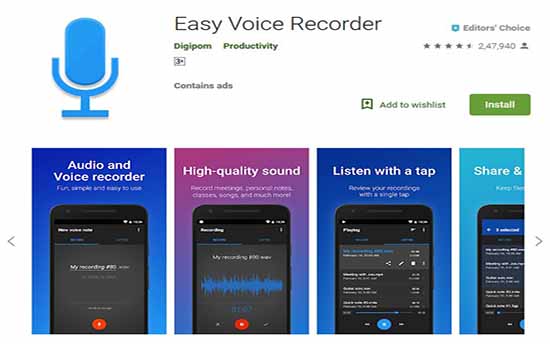 On the way to somewhere if you want to record some audio around you, Easy Voice Recorder is a convenient and best audio recording app. Like its name, it does not carry a large number of features but serves the purpose of the app.

The app is available as a free and paid app. The free version contains ad which the paid version does not. All the recorded audio are readily convertible to mp3, and you can export to any device you need.

In the paid version you get some more feature. You can record in stereo mode with supports of Bluetooth microphone, gain adjustment and skip silence if you have the paid version of this recording app for android,

So as the name says the app is the easiest solution not only for those who have a requirement of recording only but for those who want the modern feature also.

That’s why this app gets a place in the list of best voice recorder app for android. 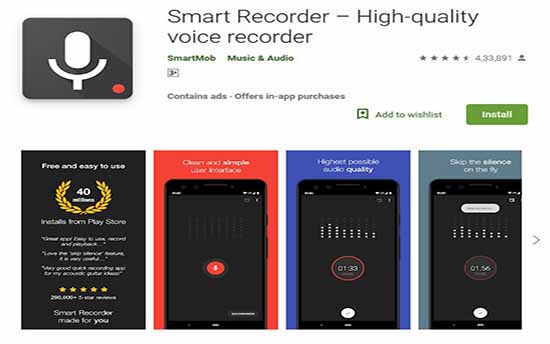 Like its name, Smart Voice Recorder serves a variety of intelligent feature through a simple interface. All you have to do is to open the app and press the recording button to have a high-quality sound recording. Side by side, when you require a unique feature, it provides those also at one’s fingertips.

You can record in the background while the display is off. Like another recording app for Android, this has a similar function like play pause stop send or share high quality recorded files in mp3, Ogg format.

The app comes with a live audio spectrum analyzer and microphone gain calibration tool as a unique feature. But this app cannot record calls in paid version also. 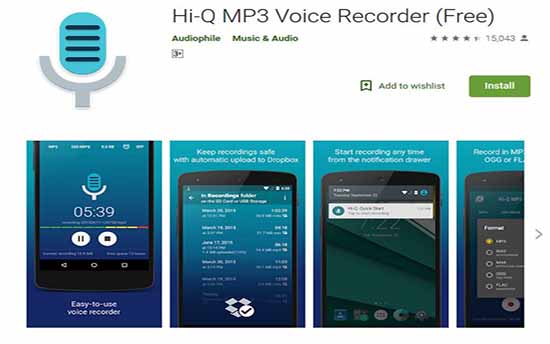 If you want to make your phone to work like a pro in recording audio of whatever is heard then Hi-Q MP3 Voice Recorder is your right companion. The free version of the app has a limitation of recording up to ten minutes only which changes to unlimited timing for the paid version.

Its high fidelity 44 Hz sampling capacity and customisation options have made this app as the best android app of 2019.

Personal notes, memos, singing practice, lectures and interviews are more comfortably handled once this app is available. Its simple interface and MP3 output files make it easy to handle while recording or in post-recording sessions.

The recording data is automatically uploaded to Google Drive or Dropbox as per availability of network via WIFI or mobile data or both which makes the app as the safest app for data protection. In adverse situation also your audio data can be transmitted to your hosts automatically without any additional effort.

A wide range of customisation option like recording in 320kbps bitrate or recording in other formats like AAC, WAV, M4A or OGG makes the app the excellent for recording voice on android device. 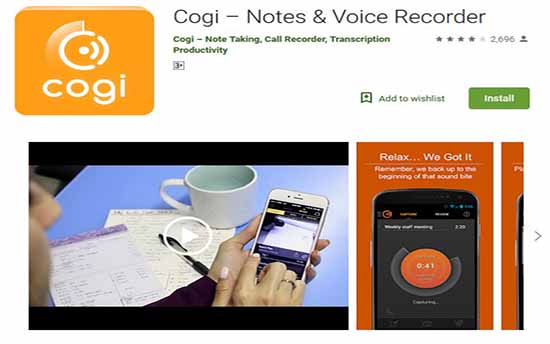 When you are in search of the best recording app which provides you with not only a few but almost all the feature you need for voice recording then the name is Cogi. Gaining appreciation through user reviews have made this app the best app of 2019.

This app has taken note-taking to the next level through its highlight notes feature. In a lengthy note if you are to review the highlights of the day, then Cogi does the work for you and provide the highlighted conversation. You can then transcribe, convert to text by using the distinctive feature of cogiscribe.

Besides Cogi has the option to record phone calls. So if you want to highlight the audio from your conference call meetings, Cogi, the best android recording app, is the lifesaver for you. Once you have the Cogi membership which can be availed through minor charges, you get to the access of Cogi cloud for storing your voice data safe.

All these features have made Cogi as one of the best voice recorder app for android. 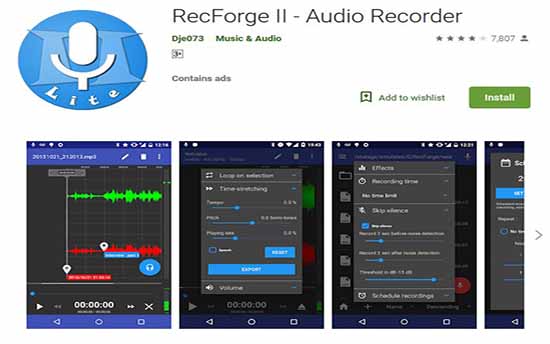 RecForge II – Audio Recorder is not just a recording app for android, but its varied range of feature has made it monumental for the musicians. Its highly customizable features in recorder vide sample rate bitrate, or codecs give you the option to experiment with the recording.

Another feature of this best recorder app for android comes in the playing mode where you can loop the recording in case of memorising the same, and this is suitable for actors to prepare for their plays. Also, you can change the recorded music to different speed to make use while editing. Speaking of the prime feature is the editing mode of the app which is a platform to show your creativity in the sound world.

When it comes to declaring any app as the top of the list of best voice recorder apps for android, it becomes difficult due to variations of features in each app. But if you need to choose an app which has the most formidable features you require at the lowest price then Hi-Q MP3 Voice Recorder is the recommendation.

If you find the analysis useful, make comments on the following comment box.