Completing such challenges would bring a severe boost to your overall performance in the game, irrespective of your tier.

Even if you are at a lower tier, these challenges would help you to gain more experience points and level up quickly.

You will be receiving 5 Battle Stars for completing this challenge.

It sounds surprisingly easy and uncomplicated, and in fact, one of the easiest Fortnite Season 8 Week 6 challenges that you’re going to find on this page.

We will be giving you a step-by-step guide for completing each aspect of this challenge:

Step I: Choose the correct game mode. Although it seems to be quite unnecessary to many players, I’d suggest you try your best, and as a part of doing your best, do this too. The best option is always Team Rumble for completing such challenges, but solo is also not a bad choice for those who want to couple this challenge with another one.

Step II: For visiting the Metal Llama, drift towards the pleasant north-west side of the map, near the corner. Instead of going directly to the llama, you could better get hold of a drift-board with which you can steadily progress towards the location, and in case if you find an enemy, it’s a bonus point for you.

Step III: After having visited the metal Llama, go towards the Haunted Hills on the drift-board, and just a bit south of it along the edge of the island, you can see the Wooden Rabbit clearly.

Step IV: Next up, visit the place near Lucky Landing (as marked on the mini-map), and there you would find the Stone Pig. It’s better to land directly above the stone structure, as that would save much of your time which might have been spent in gathering wood, to build stairs. A great timing is the biggest key to success in Fortnite.

Note: Although I’m not completely sure about this, there will be one chest filled with various items, in almost all these 3 structures that are to be visited as a part of the given challenge.

Please check out for such crates, and if you accidentally find any of these crates looted, there’s a high probability of another player present in your vicinity.

2. GO TO THE HIGHEST ELEVATIONS ON THE ISLAND, IN BATTLE ROYALE

This challenge offers a reward worth 5 Battle Stars.

Would you have ever thought about getting such a weird challenge in Fortnite Season 6?

Well, I never expected. However, since it’s there now, you must be thinking about starting your game and hunting down the solutions to this challenge. But, little did you know that we have already made the task 95% easy for you. For the other 5%, you just need to follow the guidelines listed below. And it’s advisable to attempt this challenge only in Team Rumble (Squads) mode because solo mode includes a higher risk of getting eliminated at the very beginning. This is because most of the players are just going to be traveling to such places since the challenges have been officially released, recently. 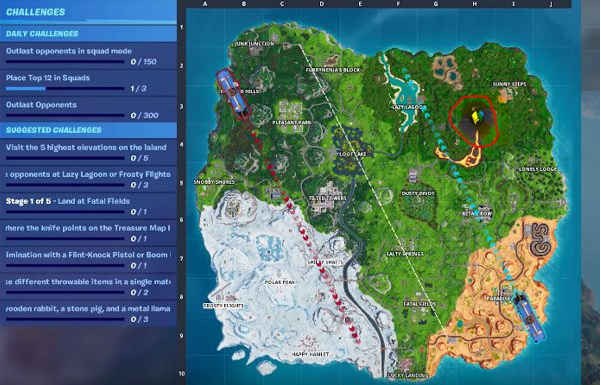 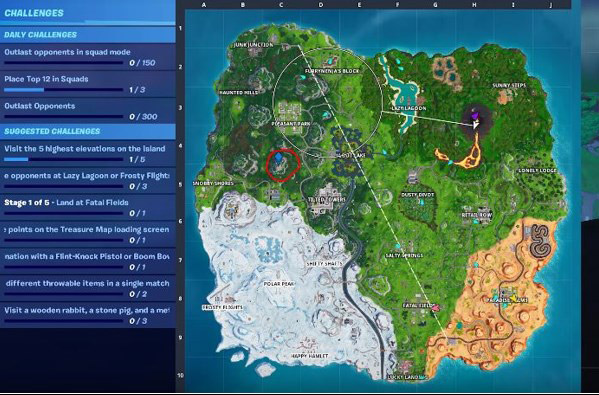 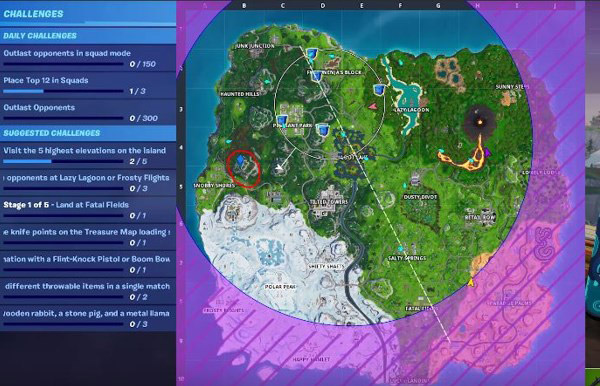 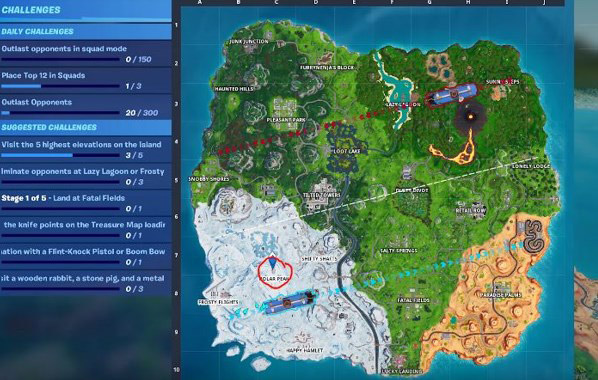 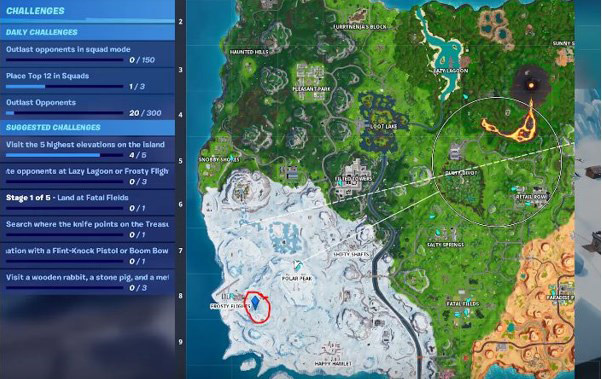 This Fortnite Season 8 Week 6 challenge has a reward worth 10 Battle Rewards. It’s also going to be much harder when the challenges get unleashed because most of the players will move onto these areas to get their challenge accomplished. So, there’s no need to rush, and it’s advisable to have patience until and unless this huge mess regarding the week 6 challenges doesn’t fade off.

Both of these locations are almost similar in terms of loots and size. But remember to attempt this challenge only in solo mode, because you can get eliminations easily in that case. Lastly, you should land on either of the locations whichever is closest to the route of the battle bus, in order to get into unnecessary hassles.

It’s important that you start gathering weapons just after landing at the desired location. The best choice in this case, would be to land at a house. Although it’s not a sure-shot mechanism, there’s still a higher probability to get a weapon inside a house.

Also, try not to rush into hitting the enemy with your shot, as that would only waste your time and ammunitions and may even get you eliminated. Instead, try to stay calm and dodge every shot fired by an enemy until you get to a secure position, and pick up a proper gun.

Stage I – Land at Fatal Fields

You’ll be receiving a sum of 5 Battle Points after completing this challenge. As you can judge by its declaration, it’s an easy-to-do challenge as you just need to land at specific destinations, and you can even get eliminated after that, and still get the reward.

As this one’s an exceptionally straightforward challenge, there’s not much to say about it. But try to couple this challenge with another one, so that you could kill both the birds with a single arrow. For example, if there’s an elimination mission too, try attempting that along with this one. It will save a huge portion of your time, as one option (landing) is surely going to be completed.

5. SEARCH FOR KNIFE POINTS ON THE TREASURE MAP LOADING SCREEN

You are going to get 5 Battle Stars for doing this challenge successfully.

The racing course is on the east side of the Battle Royale map, where the desert lies. Slightly to the north of the race track, there’s a bunch of trees present and the treasure is supposed to be within this group of trees. Don’t quote me on this, but here’s a higher level ground right there, and a brown patch on it, and the treasure might be located here.

6. USE 2 THROWABLE ITEMS IN A SINGLE MATCH

It will reward you with 10 Battle Points on successful completion.

Again, it’s a simple task and you can finish it off within minutes after your landing. Wherever you land in the map, rush to the nearest looting locations and pick up quite a few items quickly so that nobody else can eliminate you in the very first phase of the match.

The throwable items that you can get, may be among the dynamite, clingers, stink-bombs, disco bombs and also impulse grenades. Although the list may vary but it’ll be a nice attempt to try picking up and dropping these items in a match and see if you could win the rewards or not. You can drop just one of any item among the ones that have been listed above, in fact, it’s better to keep picking up and dropping most of the items that you get in your way.

So, here was the complete and in-depth analysis of all the Fortnite Season 8 Week 6 challenges. We hope that you enjoyed reading and accomplishing every mission with a high spirit. There may be a lot of failures while trying to cover up these objectives, but please try to dedicate more time to complete these challenges. Because Fortnite is not only a battling and action-packed game but it also has a deep RPG characteristic to it, which makes it even more fun and exciting to play.